One of my favorite websites is the artofmanliness.com. Sometimes Brett and Kate will put up some hearty recipes that they cook at home, but what I really like is that they will write a little bit about the history of a dish.

Awhile back I saw a recipe for How to Make Hearty, Savory Pasta Carbonara Using only One Pan. Carbonara got its name from Carbonaro, the Italian word for Charcoal Burner. Italian charcoal workers would camp in the woods for weeks and would bring non-perishable foods like dried pasta and cured meats to cook over the open fire. Carbonara has a history of hardworking laborers cooking a hearty meal over the fire.
​
A dish cooked by hardworking laborers? You know that dish is gonna have some soul. Wait… all I need is eggs, cheese, bacon, and pasta? I can do this. But why try this at home when I can do this over the fire like a true Carbonari? Camplifebros Carbonara coming up! 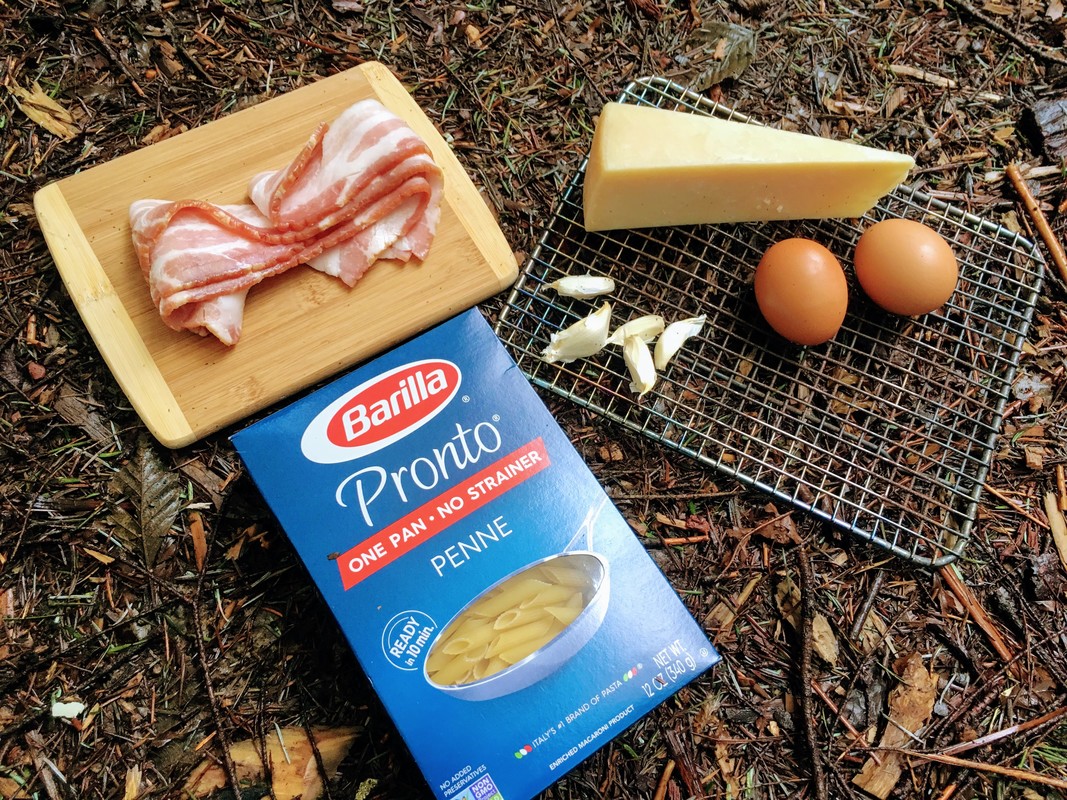 Prep in the Woods

So how much wood will you need? Probably just a couple of 5 inch rounds and some kindling. You can definitely make this over a canister stove if you have a fire ban, but real a fire is a billion times more fun. Twig stoves  would work great for this recipe too! 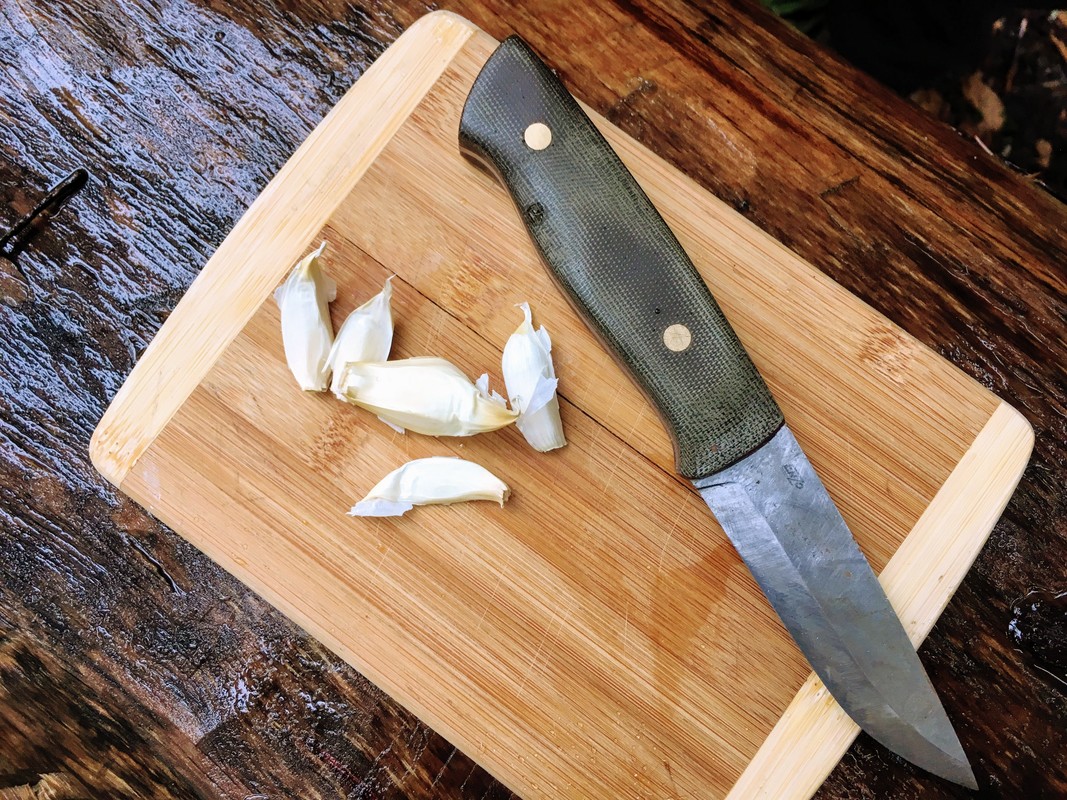 Mince the garlic and toss it in the pot/pan with some butter, cooking oil, or lard. Saute the garlic over the fire for about a minute. Once the fragrance is released it should be good enough. Scoop the garlic out of the pan and set it aside somewhere, maybe on a cute block of wood. The cuter the better.

(Optional)
Cook the bacon in the pot/pan. I didn’t do this because it looks better on camera to cook bacon in whole slices. Yes, I’m vain. I’d probably cut up the bacon in small pieces, toss it in the pot/pan and cook it over the fire until it gets just a little bit chewy. No crispy bacon here. Right before the bacon is done, I would saute the minced garlic with the bacon.

Boil some water in the pot/pan that you just cooked the garlic with. Maybe about three cups of water if you’re cooking one cup of pasta for one. Not a big deal how much water you put in, you can always strain some water or add some water later.
Once you get the water on the fire, you can start grilling the bacon. You can hang it on a stick, or if you have a grill, just rake out some coals and cook it on the grill. I prefer the bacon to be on the softer side rather than the crispy side, that way you can close your eyes and pretend that it’s some fancy Pancetta. The bacon will probably finish cooking before the water gets done boiling. After the bacon is done cooking, go ahead and cut up the bacon into small pieces. 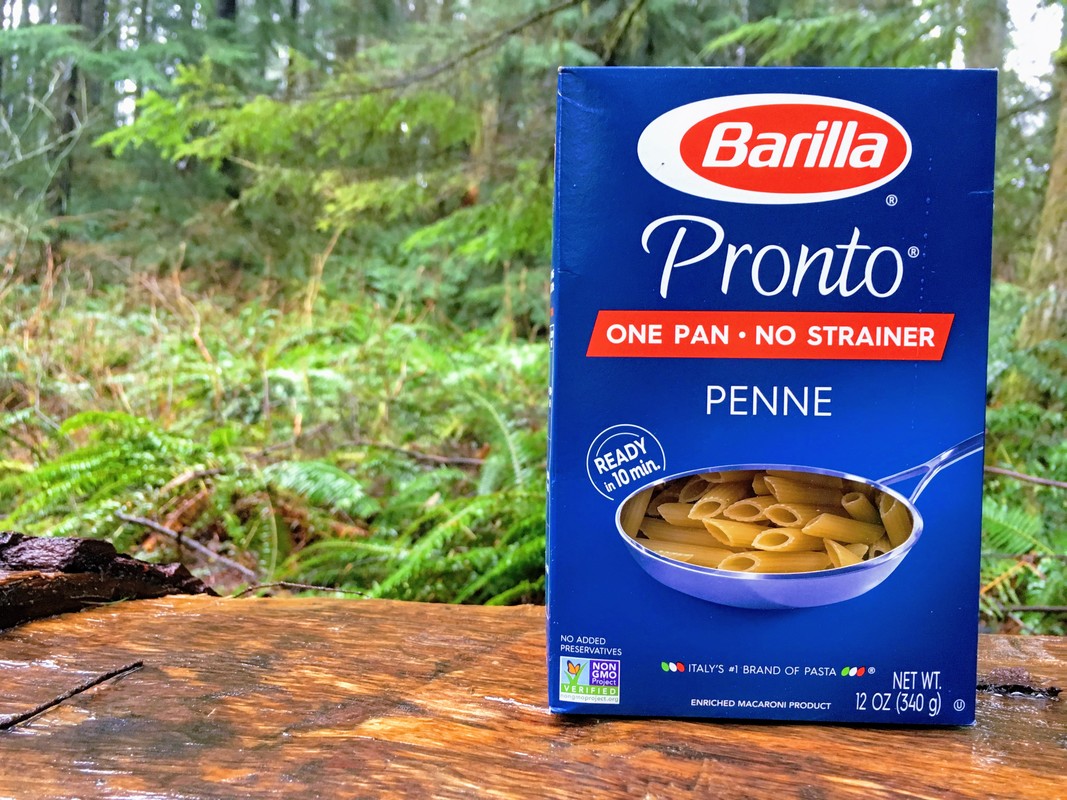 Pour about a cup of pasta in the boiling water. Yeah, I’m pretty sure penne isn’t commonly used for carbonara, but I couldn’t find the Pronto spaghetti noodles at my grocery store. I didn’t really measure how much pasta I put in there, I just tried to make sure there was enough water to submerge the pasta. You are going to boil the pasta uncovered for about 10 minutes, stirring it on occasion, letting the water evaporate and letting the pasta absorb the water as well. 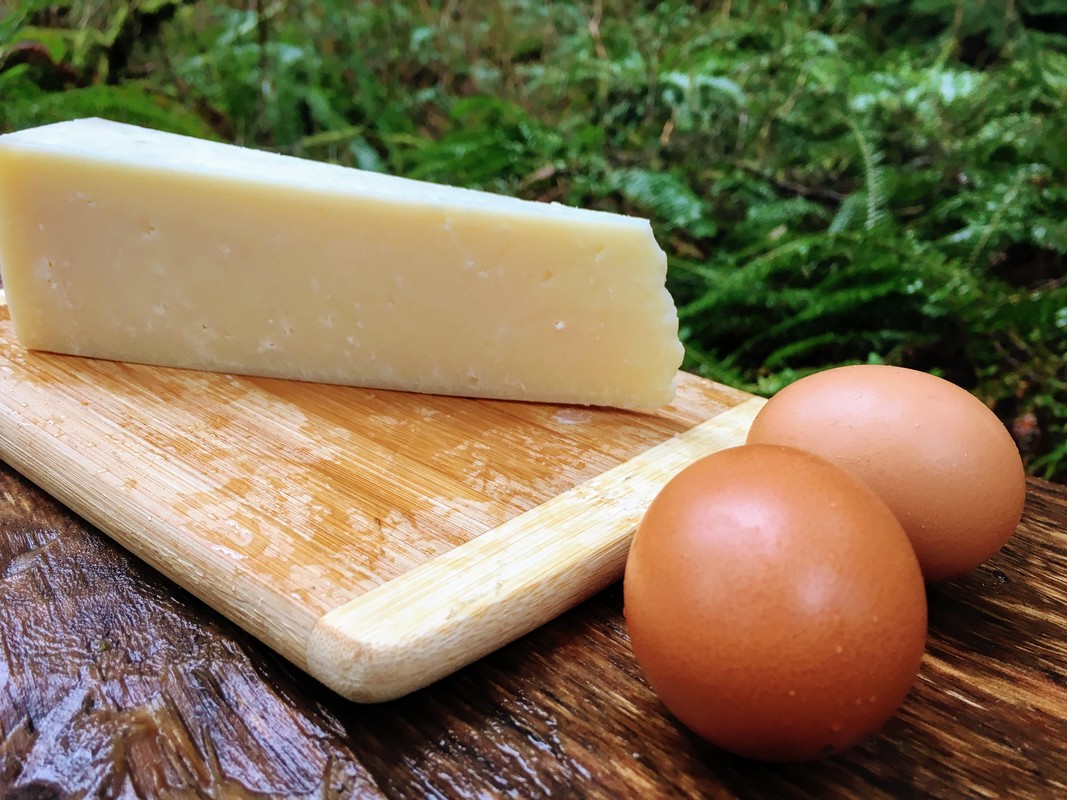 While the pasta is boiling, it’s time to prep the sauce. You’ll need a couple of eggs and some Parmesan cheese.
-- This tool makes your cheese better (Find at Amazon - Microplane 40020 Classic Zester/Grater)

Next up, crack the eggs and whisk them until they are mixed evenly. Add the grated cheese to your egg mixture and stir it up. You should have the consistency of a milkshake that has been sitting out for an hour in the summer. Thick, frothy, but not stiff. Add some pepper and salt and your Egg/Cheese Sauce should be ready to go!

4. Combine the Pasta with the Egg/Cheese Sauce

The pasta should be done after 10 minutes of boiling over the fire. If there’s too much water in the pot/pan you can strain some of it out. A little bit of water is fine, it helps you get a little more sauce if that’s what you like. ​ 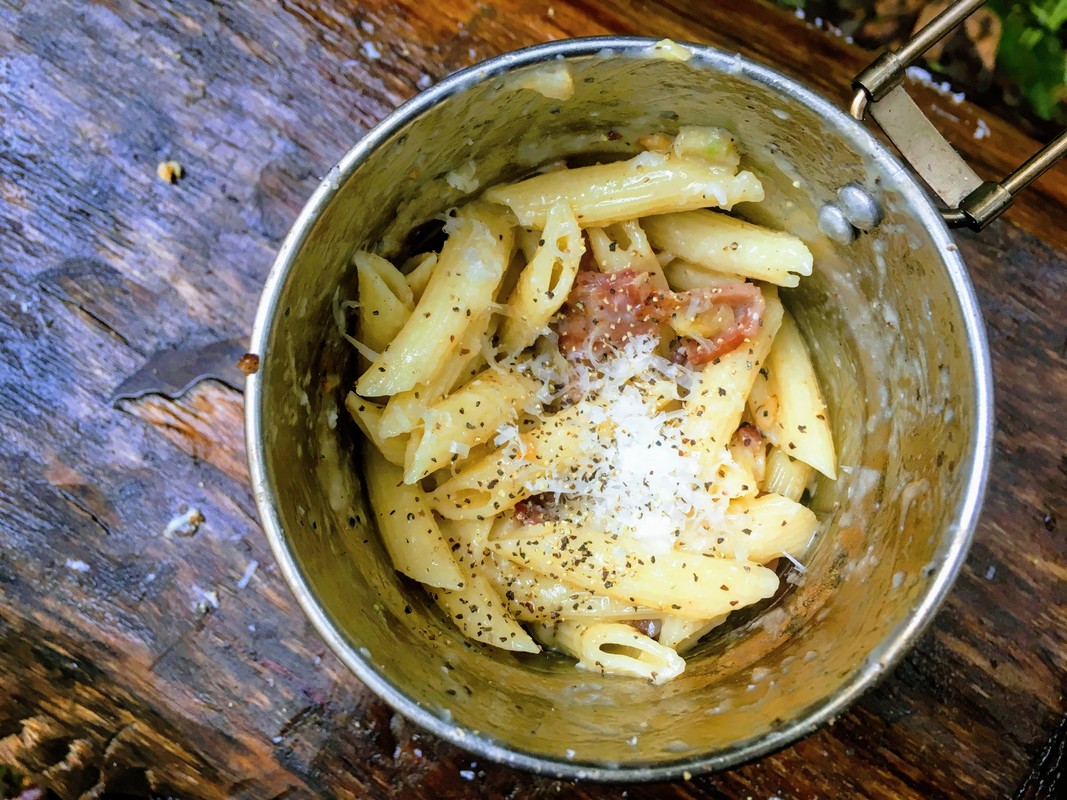 Take the pasta off the fire and slowly begin mixing the egg/cheese mixture into pasta while it’s hot. The hot pasta will cook the raw egg and melt the cheese to turn it all into a pot of yummy Carbonara goodness. Don’t do this step over the fire, too much heat and you will end up with scrambled eggs and pasta, which is good too, but you’re here for Carbonara. Add as much egg/cheese mixture as you’d like, and don’t forget to mix in the bacon and the garlic. Season to taste and top it off with a little more cheese and black pepper. And there you have it… Campfire Carbonara from the Camplifebros!

How to Make this Super Easy!

So here comes the philosophical part of this post. You can prep a ton of the ingredients at home before you go out into the woods, theoretically you can just cook this Carbonara in its entirety at home and just heat it up when you are in the woods. At the same time, you can prep none of the ingredients and make everything from scratch. You could bring flour and water and make your pasta in the forest if you wanted to. I think it all just depends on how much you like cooking. There is a delicate balance between convenience and challenge. Just because you chop the vegetables out in the woods doesn’t make it taste any better, but it presents a challenge, and challenge is good for the soul. With that said, I didn’t prep much at home, but here’s the things I would prep at home before going out.
​
Precook the bacon? Yeah, you can do that if you are leaning towards convenience, but there is something about the sound and scent of bacon sizzling that really gets the appetite going! 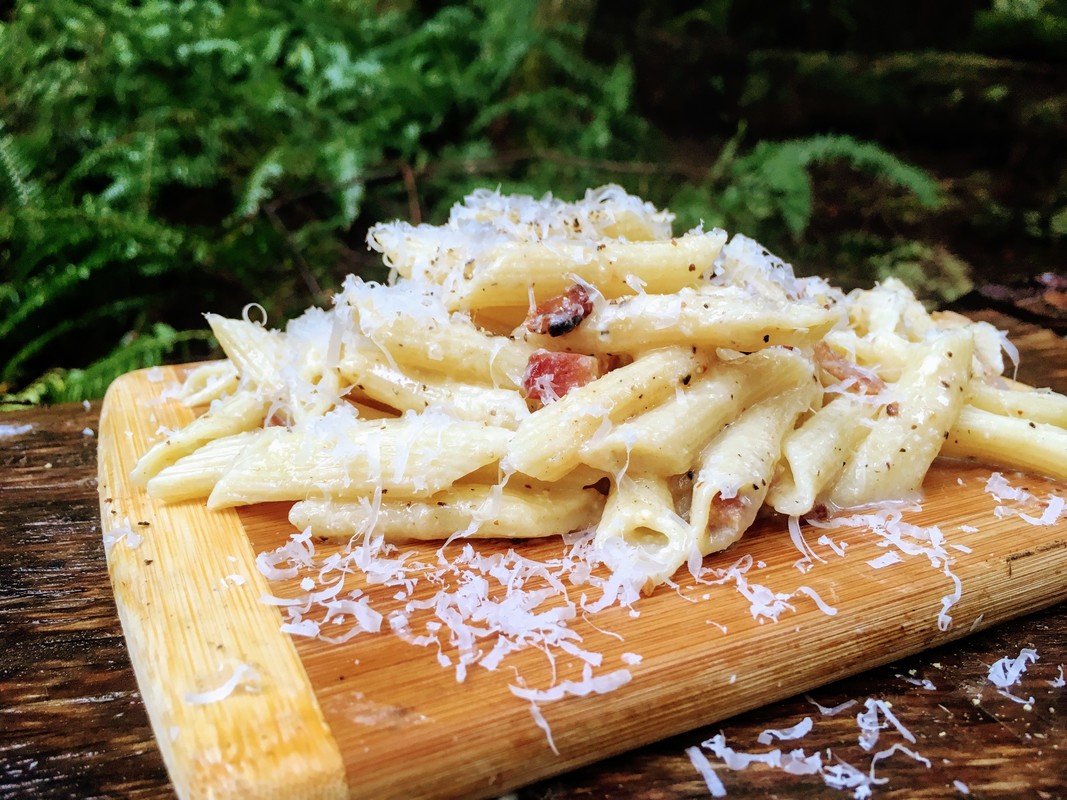 This is one of the easiest “impress your friends dish” that you can cook over the campfire. You’re cooking mostly from scratch, yet it takes just a few ingredients and only a short amount of time. And at the end you get an authentic Italian meal cooked over the fire like a true Carbonari!


-- Herman
-- I used a pasta similar to this (Find at Amazon - Barilla Pronto Pasta, Rotini)

-- Check out Brett and Kate's recipe here - One Pan Pasta Carbonara at Artofmanliness.com