DIY Insulated Hammock for Under $99!

Hammock with Sewn on Underquilt using two Costco Down Quilts

There were three reasons why I wanted to try sewing an underquilt onto my hammock. Hammocks are so cheap and easy to make, I don’t mind having multiple hammocks for different seasons and occasions. So I decided to make a winter hammock. Using two Costco down quilts, and some fabric from Ripstopbytheroll.com, I was able to make make an insulated winter hammock for about $60-$100. Read on to see a step by step tutorial and to see how it turned out.

Prep the Costco down quilts

​The hardest step is the first step, and that’s ripping the seams to create channels for the down. The down quilts are 70”x 60”. Rip along all of the 70” length seams. This will open up and create long channels along the 60” width.

​To create more loft, we will be concentrating the down by removing some of the fabric. To do this, consolidate as much of the down as you can to one end of the channels, then sew a straight stitch across the 70” length approximately 10” from the edge. After you’ve sewn the new edge, you can cut the excess fabric.
​After you’ve cut the two quilts down to their final size of 50” x 70”, you can sew them together along the outer edges. The quilts have a reflective edge and a non-reflective edge. I decided to keep the two reflective edges facing the same direction to help with the insulation.

You can make your own hammock, or better yet, just use one that you already have lying around. If you have one lying around, just skip to the next step, if you want basic instructions on making a hammock, read on.
Decide on the final length that you want, then add about 8” to 10” for the sewn channel. I ended up with a 9’ x 60” hammock. The width of the hammock was essentially the width of the fabric I got. There are wider fabrics out there, on ripstopbytheroll.com just look for the XL fabrics, those are about 70” wide. I just used the regular width fabrics, about 60”.
​
Once you’ve cut your fabric, you will want to make a double-rolled hem along all four edges of the fabric to hide the raw edges. After you’ve hemmed all of the edges, you are basically going to make a much larger double rolled hem on both the head end and foot end of the hammock to create the sewn channel. The channel just needs to be wide enough for you to feed your whoopie sling through.
​
You can reinforce these stitches for the sewn channel. Go ham. But I guess if you do too many stitches you can sacrifice the integrity of the hammock. I went with two rows of straight stitches and also one zig zag stitch. This worked, you can probably go with less or more stitches if you wish.

Sew Darts for the Underquilt (optional)

Okay, here is when things get shaky. I thought that I would need to create a differential by sewing darts into the underquilt so that when I attached the underquilt to the hammock, I wouldn’t compress the down when I lied down in the hammock. To be honest, I’m not sure if this step is necessary. Perhaps the darts I sewed were too big and too many, because I ended up creating too big of a differential and there ended up being a pocket between my butt and the underquilt. I bet you can just sew the underquilt straight onto the hammock without the darts. In another design that I looked at by Just Jeff http://www.tothewoods.net/HomemadeGearDownHammock2.html, there were darts, but I think with my design, I can get away without the darts and a differential because I have a fabric layer surrounding the down.
​
So you can probably skip the darts. If I was to make another, I would skip the darts. But if you’re worried about compressing the down when you lie in the hammock, maybe make fewer darts than I did. Check the video to see what I did.

Sew the underquilt onto the hammock

Instead of sewing the underquilt dead center onto the hammock, I decided to offset it a little bit by shifting it closer to the foot end. My butt always tends to slide further down the hammock when I’m sleeping and I usually need more underquilt coverage towards my feet than towards my head. ​ 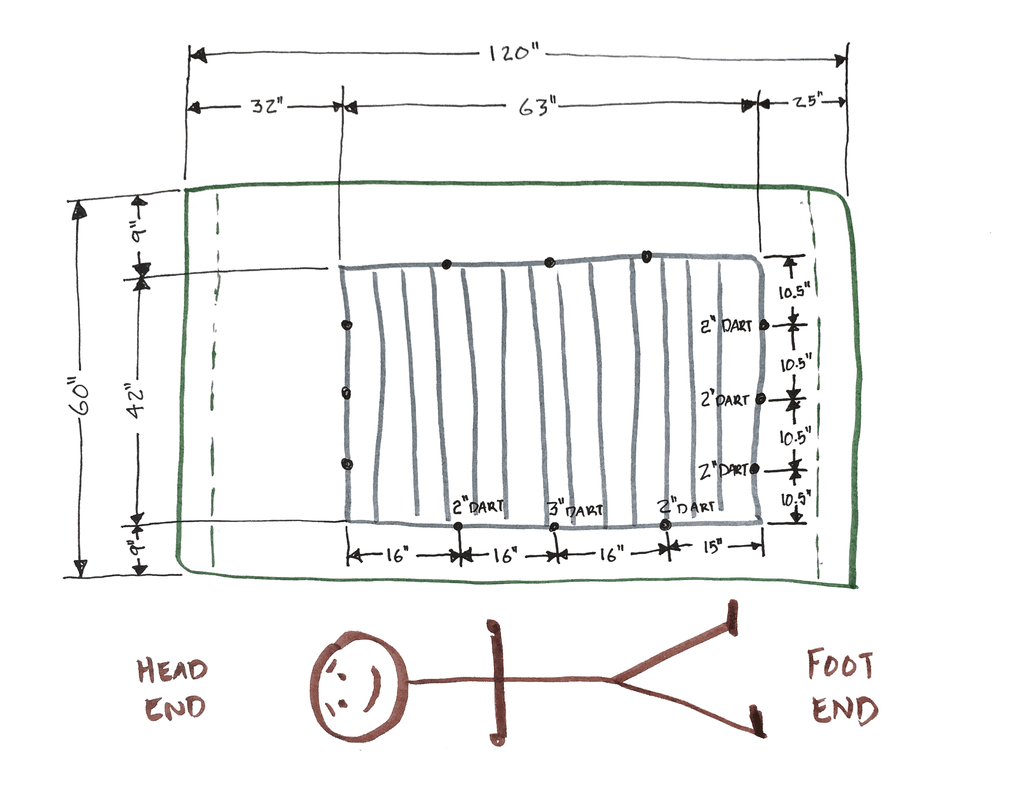 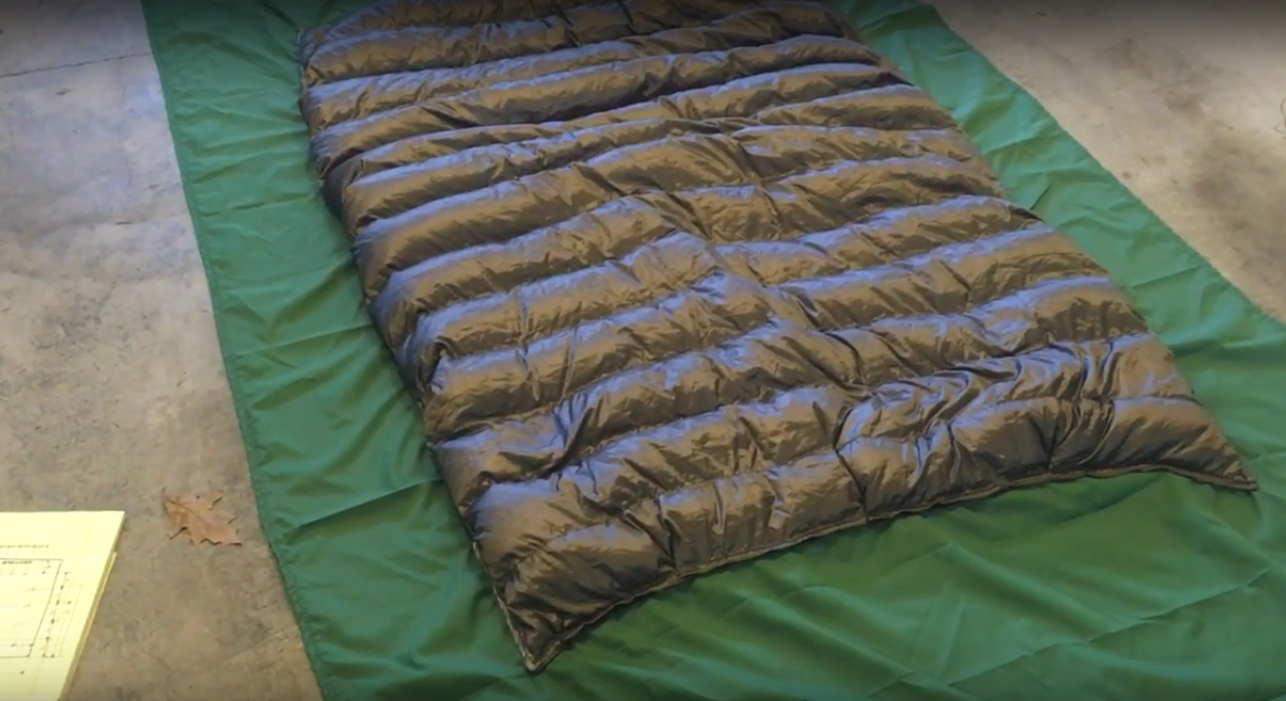 ​Once you’ve decided on how much offset you want, it’s just a matter of pinning your underquilt onto the hammock and then sewing it together! I kept the reflective sides of the underquilt facing the hammock (facing my backside when I’m lying down), and sewed it on using a single zig zag stitch. Since this stitch isn’t weight bearing, you can keep it pretty minimal.  Put on your chosen suspension, and Voila! You have an insulated winter hammock for under $75! Total time… (4 hours).

I took this out for an overnighter. Set up was a breeze. No need to fiddle and adjust the underquilt suspensions. I strung up the insulated hammock and was ready to go. Having one less stuff sack is a pretty nice feature as well.
​
It got down to 28 degrees Fahrenheit. The insulated hammock did mostly okay. I had a cold butt in the morning. There was a little bit of sag in the butt, I think the darts were too big and created a pocket of air in the center where my butt is. My shoulders, feet, and torso were nice and toasty, so I think the problems were the design, and not necessarily the materials used. I feel that the two Costco down quilts should work just fine down to 28 degrees Fahrenheit if you were to sew the quilts onto you hammock without any darts or differential. I didn’t have any problems with any drafts, so sewing is definitely one way to go if you want to eliminate drafts.

Coverage wise, I still needed a foot pad, I’m not a very tall guy, I’m 5’5”, so you will likely need a foot pad too. But that is the case for many underquilts out there. I actually don’t use a foot pad anymore during the winter, I’ll just fold up my coat and use that for a foot pad. It doesn’t slide as much as a foam pad and does just fine for insulating my feet if they slide out of coverage.

Learn from me, sew your underquilt onto your hammock without any darts. I don’t think down compression is a factor in this case with the Costco down quilts. It will also save you a step. For less than $75, you can make a winter hammock and down underquilt that goes down to 28 degrees and packs down pretty small too. It takes very little skill doing this. Nothing but a little bit of cutting and straight line stitches on a sewing machine. As a novice, this took me about 5 hours. If you’re a beginner, this is definitely a fun and feasible project that has a huge payoff and doesn’t cost much. Comment here if you’ve sewn an underquilt onto a hammock. I’d love to hear from you! Cheers!