How to Cook Campfire Potatoes Patagonia

​Once again, inspired by the Patron Saint of campfire cooking, Francis Mallmann. Mashed potatoes are great, but boy are they a hassle to make. French fries are great too! But also a hassle to make. So, let’s combine them. I present to you Patagonian Hand Smashed Crispy Potatoes, also known as Potatoes Patagonia... yep, I made up that name.

This is a simple recipe. You'll need some potatoes, and maybe some aromatics like some garlic or green onions. I like to use colorful potatoes because they are pretty and sexy. Not too big, maybe fingerling size, or a little bigger. They cook faster if they are smaller... I am impatient. Pack some butter/lard/or cooking oil, and a little bit of pepper and salt, and you are ready to go!

​I love using carbon steel pans for this recipe. They are lighter weight than cast iron so it's easier to pack into the woods, but they still have the same properties as cast iron that get you that nice crispy potato. The best French saute pans and Chinese woks are made with the same material, carbon steel. It needs care and seasoning just like a cast iron pan. It's still heavy, but not as heavy as cast iron. You can easily wield it with one hand. If you're having an amazing meal at a nice restaurant, chances are, some of it was cooked in a carbon steel pan. ​These pans are popular with restaurant chefs. 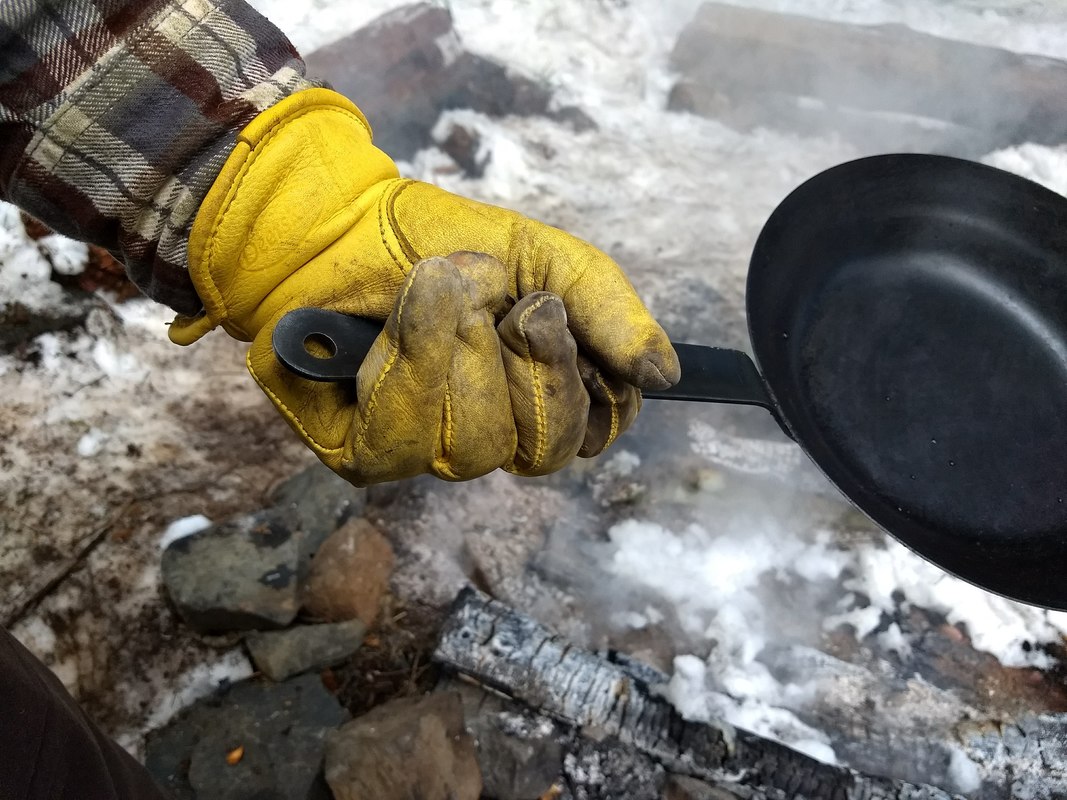 You can use whatever pan you'd like, as long as it's not a pan coated with non-stick. Non-stick pans just don't give you the crispy browning that you want with Potatoes Patagonia. I'm pretty certain Francis Mallmann would never use a non-stick pan out in the woods. ​
-- This is great pan for this recipe - Find at Amazon - Mauviel Carbon Steel Pan - Made in France

How to Make Campfire Potatoes Patagonia 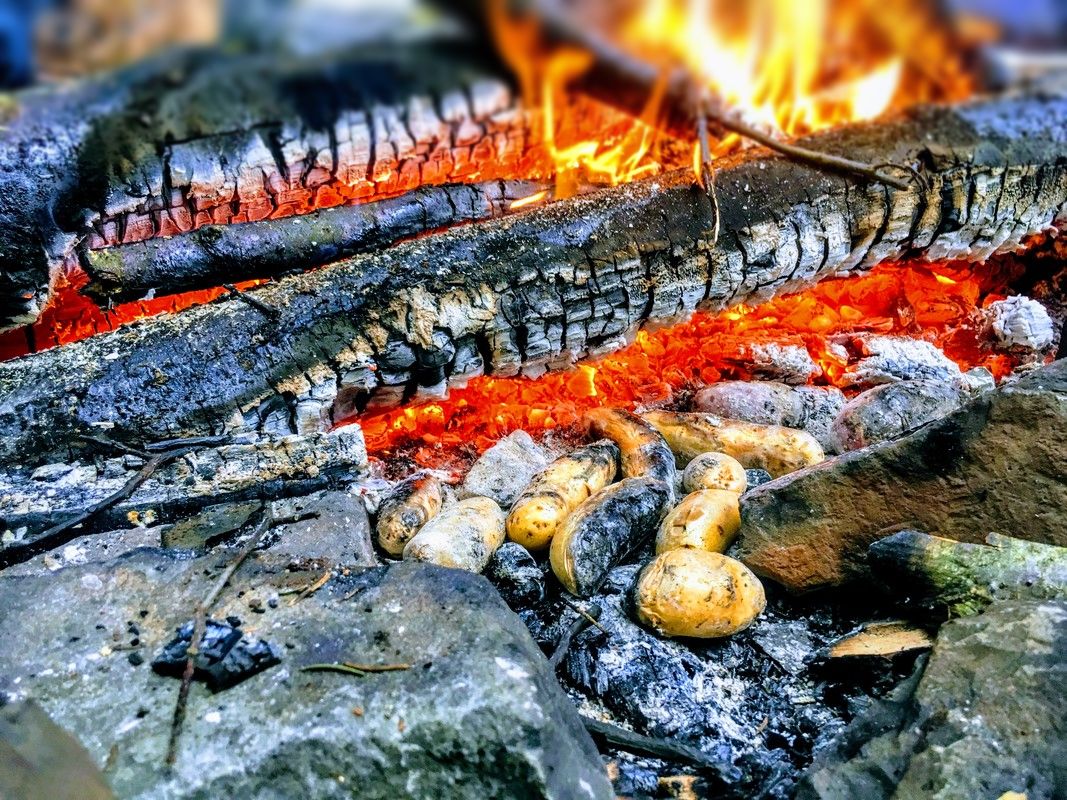 Build a fire big enough that you can scrape out ashy coals to put your potatoes in. Ideally, you want to bury your potatoes in ash, but I'm never willing to wait that long or build a fire that big. So I just put them on top of some ashy coals by the fire and try and rotate them so that they don't char too much. As you can see in the picture above, I definitely got lazy and charred some of the potatoes. But that's fine, no problem at all, it will still taste good, if not better. It'll take about 20 minutes in the ashy coals, give or take 5 minutes, before the potatoes are ready.  You can also boil the potatoes if you're afraid of char. Boiling does make things a little bit easier and maybe a little prettier, but it's just not as fun, not as rustic, and not nearly as impressive. 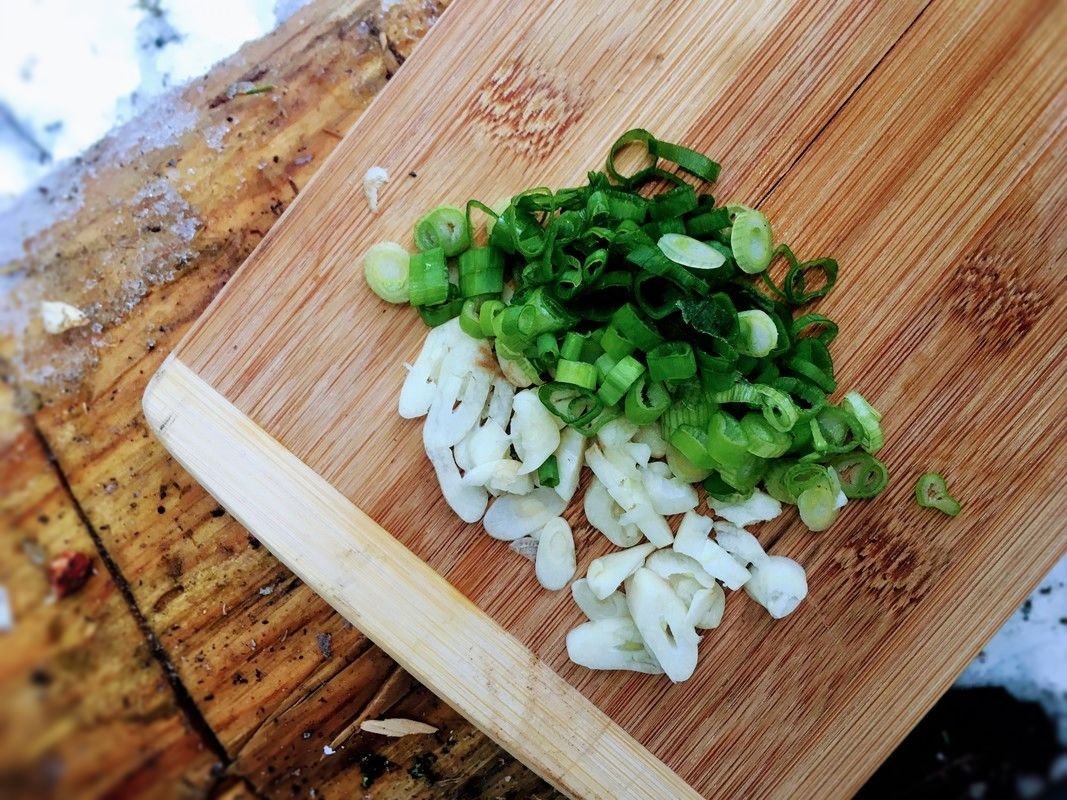 Rotate and check on the potatoes every now and again. The potatoes are done when you can squeeze them with your fingers and they have a little bit of give. If you feel like you can mash them down with the heel of your palm, then they are done and you can take them out of the fire to cool for a few minutes.

After they've cooled for a bit, smash them flat with your hands. When you smash the potato, try to keep it in one piece, about half an inch thick or less should work just fine. Fry up the flattened potatoes in the pan with some butter/lard to get a nice crispy brown crust on the outside of the potato. When the potatoes are done frying, finish it off with the aromatics, a little bit of fresh garlic and green onions in the pan for a quick fry, then some salt and pepper, and maybe even some spice! 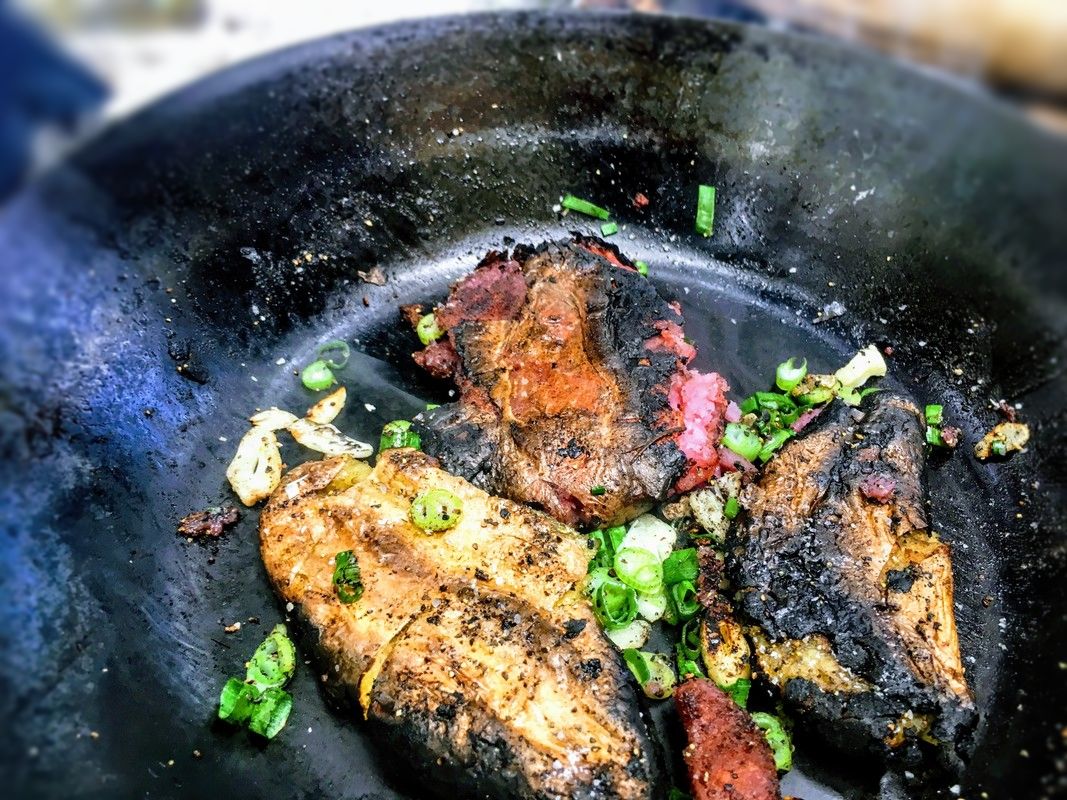 There you have it. Potatoes Patagonia. A simple and rustic recipe. Crispy on the outside, soft on the inside. A Camplifebros original recipe! Well, not really, if it wasn't for Francis Mallmann cooking potatoes over the fire in a hundred different ways, I would never have been inspired to make this dish. So this is my fan letter to Mr. Mallmann. Thank you for elevating outdoor cooking to such a high peak. You make the wood fire a romance, and I've fallen in love.